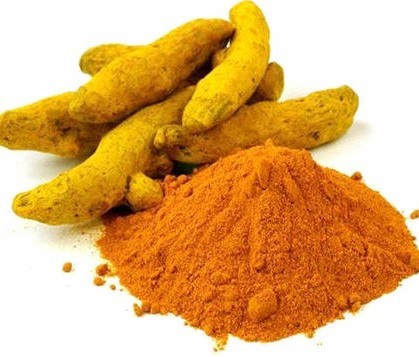 Turmeric is a rhizomatous herbaceous perennial plant of the ginger family, Zingiberaceae. It is native to southwest India, requiring temperatures between 20 and 30 °C and a considerable amount of annual rainfall to thrive.

A cousin of ginger, Turmeric is the main spice in the curry powder used in making Indian Curry Masala.

Turmeric is a leafy, stem-less plant with oblong lily-like leaves. It is harvested for its roots, or rhizomes. These are collected from February to April. Roots are boiled for few minutes and dried. The boiled and dried root is grounded into the bright yellow powder for cullinary usage.

Turmeric is useful in fighting infection and reducing inflammation and contains high amounts of antioxidants.

Turmeric oil is used in perfumes, and its resin is used as a yellow color component in foods. Turmeric is also used in toothpastes, makeups, soaps, skin ointments, dyes and coloring for easter eggs.

It is also used for day to day headaches, colds and mild infections.

Preliminary studies found that curcuminoids may